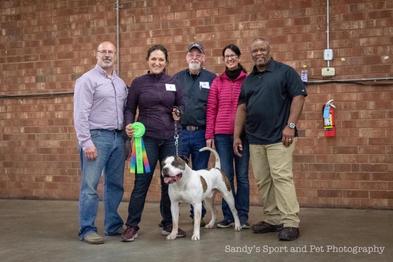 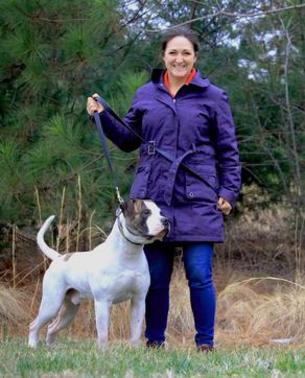 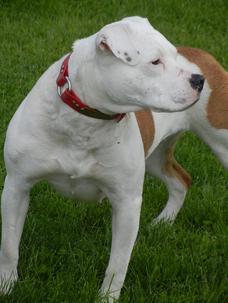 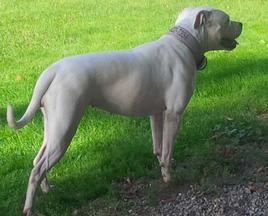 Lexus was my very first bulldog.   She was the most stable and loving family dog, with a very serious side to her in a real and provoked situation.  At 5 years of age, we started learning protection work, and earned her Irondog GDT (Guard Dog Test).  She spent the days outdoors guarding the property and inside with the family at night.  Lexus loved running a lurecourse, doing protection work, catching hogs and her absolute best buddy was Peanut.  I miss her dearly and have implemented a Dogwatch Hidden Fence system since her passing to keep the rest of the dogs safe from random road crossings.

At 16 years old, I put miss Peanut to rest beside Lexus.  She could've kept going physically, but she wasn't the same anymore.  She gave me many years of happiness, and was always the greatest little critter ridder and so tolerant to the bulldog nonsense.  She was  one happy, busy little girl.  You would never know her age and although she has slowed down, she still goes out daily on critter patrol.  At 16 years old, she was still fearless in taking down raccoons, and has the job of sniffing out mousenests in our equipment  She had 3 litters that are all in super active family and working homes.  I'm not sure I can have another terrier again....not sure how one will ever compare to her!  Her spirit lives on in the bulldogs! 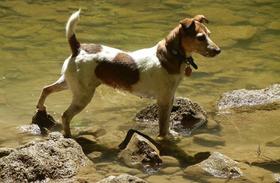 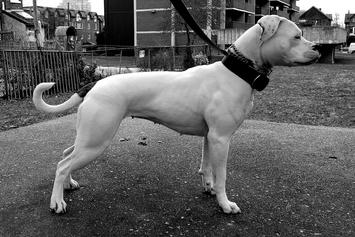 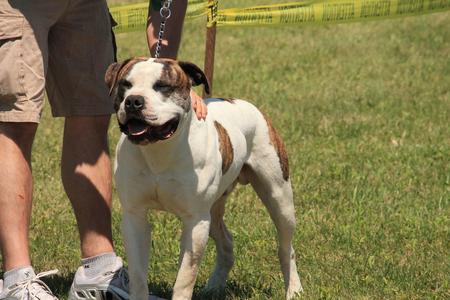 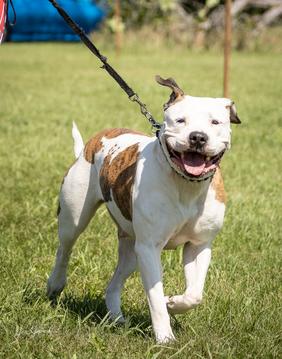 We sadly lost Skully at 7 years old.  He was a true force to be reckoned with and one big powerful confident dog.  This was a tragic hit and loss to our family and our kennel.  Fortunately, I have semen on ice for a few breedings in the future once the right female is found.  We also have 3 females out of him that have been super producers, and now with grands in the program...he left his mark. 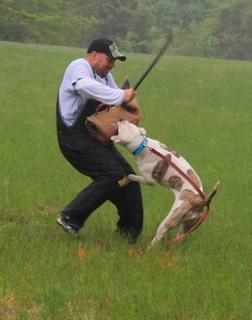 Past dogs in my program 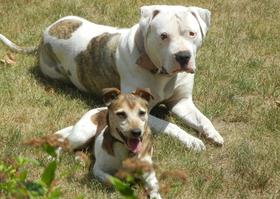 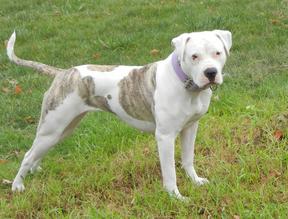 Dam to Blue, Sadie & Isabelle.  Our little spitfire was produced by Gunslinger Kennels in Mt Ulla, North Carolina.  We are very grateful for the support and guidance that Maggie Shook has provided us with this dog.  She is one high prey drive girl, who seems to be a natural when it comes to critter control at home and doing hog catchwork.  She requires a lot of exercise to keep her mind and body entertained, but she has a nice off switch to relax in the house.  She caught her first coon at 8 months, slammed her first hog at 10 months and hasn't looked back.  Just shy of 3, she was involved in catching her first 162 lb boar in the woods with only the aid of one other catchdog.  And at almost 9, she was back out hunting again in some terrible conditions...she still has the heart for the job and the stamina to do so!

Everyone who meets Phoebe loves her outgoing happy personality, and we couldn't be prouder owners of such a naturally talented dog.  Phoebe has had her hips, elbows and cardiac tested, and is NCL clear by parentage.   She also earned her 12 mile AD with zero conditioning or training,  UKC Rally Obedience level 1 with minimal training (in fact she completed all her legs spread out between her litters with minimal handling), AKC Good Canine Citizen,  Lure Coursing Aptitude,  UKC Champion title, with some points and a few wins in both ABRA and NKC shows.

She produced 3 litters for us and I can't say enough about how much she has added to the program.  Her progeny have gone on to be so many things including protection work, wild boar catchwork, conformation show titles, weightpull, agility and some wonderfully balanced family guardians. She now is a grandma and I'm happy with the next generation both in house, as well as in other programs across the world. 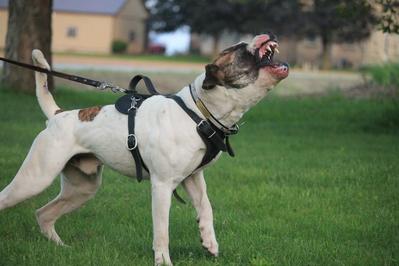 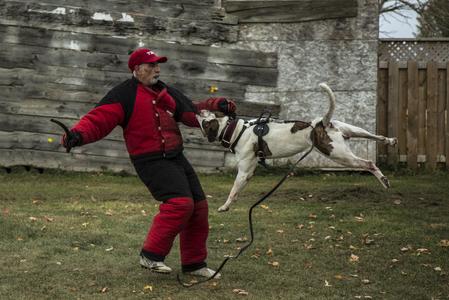 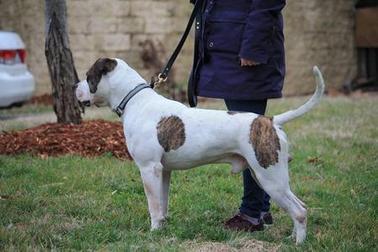 Sophie is 23" & 80 lbs. She is a very outgoing natured dog, with a tonne of confidence and plenty of drive.  She has this willingness to please and  to learn anything that we throw at her.  She's just a solid all around bulldog.   She has a tight bite with big teeth, strong topline, lots of overall size and correctness, and gorgeous pigment.  She is a UKC Conformation Champion, and has excelled upon introduction to lurecoursing, bitework training and a weightpull harness.    She is the dam to Gr CH Skully and Matt Howard's Gr CH Mickey. 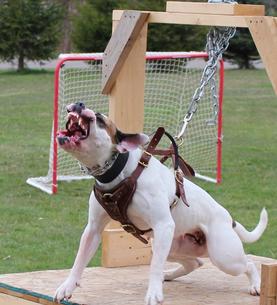 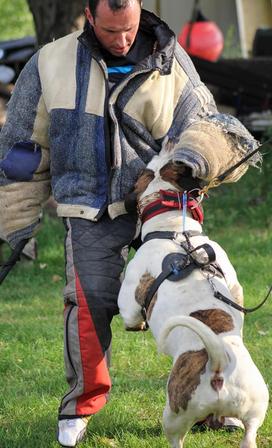 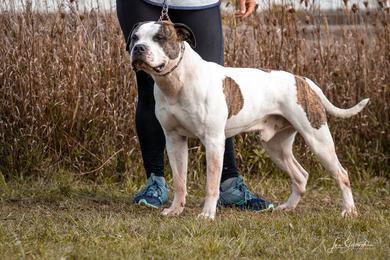 This young lady is a the extreme combination of her mom and dad.  Boatloads of prey and defense drive.  She lives in an apartment, but gets worked and exercised daily.  She's not for the faint of heart, and shows plenty of potential in work.  She is smaller than her littermate Sadie, in the very fit muscular 66 lb female, but very well put together.  She achieved her 6 mile AD just 12 weeks post whelp, and is dam to Fireball & Sobek. 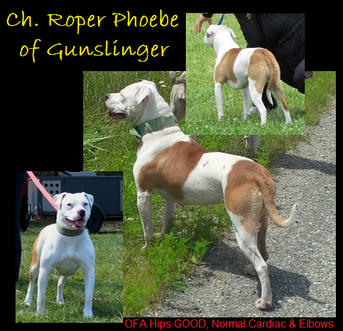 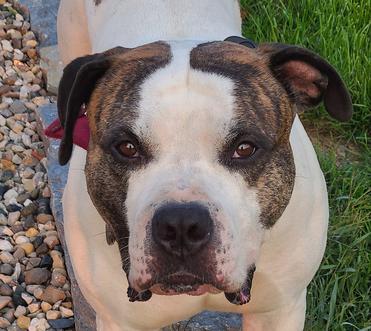 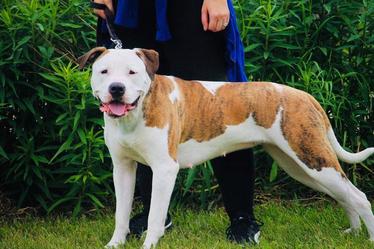 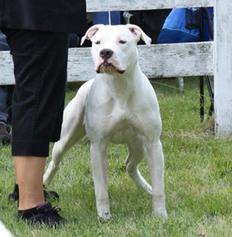